You cannot reason with the unreasonable;
WHEN IT IS TIME TO FIGHT, WE FIGHT TO WIN.
Contact Us Now For A Free Consultation 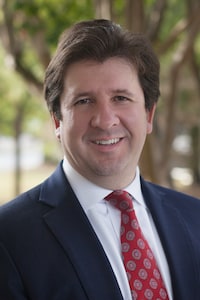 Mr. Smith has argued civil and criminal cases in United States Federal Court for the Eastern District of North Carolina, the venue for all claims relating to the water contamination at Camp Lejeune that occurred between 1953 and 1988. Few litigators are more experienced than Mr. Smith in the forum for the Camp Lejeune water-contamination cases. Mr. Smith has handled numerous state and federal administrative claims on behalf of clients seeking redress for wrongs like the water-contamination issues. Mr. Smith and Arnold & Smith's team of personal injury professionals are experienced at drafting and filing the necessary forms to commence claims, and with advocating on behalf of clients' interests.

Mr. Smith has been listed as a Super Lawyer in North Carolina since 2011. He is also a member of the Board of Governors for the North Carolina Advocates for Justice.

A tireless advocate on behalf of his clients, Mr. Smith has overseen the prosecution of numerous high-profile injury cases and obtained favorable results for hundreds of injured clients. Persons needing guidance or assistance with Camp Lejeune water-contamination cases should contact Mr. Smith and the team of personal injury professionals at Arnold & Smith, PLLC today for a free consultation.

North Carolina Advocates for Justice
Board of Governors

Client Reviews
★★★★★
Arnold & Smith was great. They are always on time for your case, they really know what they are talking about. They are very good about giving you updates on your case. I highly recommend everyone to use Arnold & Smith as your attorney they will make sure you get the best result possible for your case. By far the best attorney in the area. Austin
★★★★★
Resonable expectations were set and the results far exceeded them. I was well informed, prepared and supported by Matt and his team. They provided comfort and confidence, as well as a great outcome. I can't possibly describe how grateful I truly am for what they have done for me. Matt was recommended to be by another trusted individual and I believe that was a blessing. Anthony
★★★★★
I can't say enough great things about Matthew Arnold and his team. I had a very complicated, high-conflict case which took a lot of time and effort on everyone's part, and I feel like my case was given the time and attention it required. Matt Arnold is a great attorney, and I would go as far as saying one of the best in Charlotte, if not the best. Bree is also amazing. Amber
View More
Submit a Law Firm Client Review